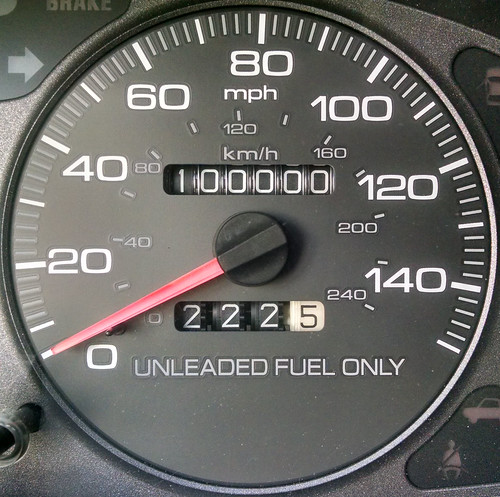 I’ve been happy with it. It’s solid, well-made, and has had few problems. Although Acura is Honda’s luxury brand, this car is basic. Not sure what I mean? Here’s an incomplete list of features this car lacks:

Granted it is from ’98 and we’ve come a long way since then.

I still like it. It’s comfortable for me. It’s pretty low to the ground so visibility over other cars isn’t great, but I’m ok with that. The cost of ownership has been fairly low. No chronic problems or mechanical disasters. I get 29 mpg with pure highway driving. Maybe around 25 mpg for city driving.

Shifts are rough and slow. The car loses power a bit then mildly lurches forward when moving up through gears while accelerating. It’s been like this as long as I can remember. I don’t know if this is specific to my car or to all Integras. You can partially mitigate the jerkiness by increasingly lifting your foot off the gas pedal as you approach the point where the transmission shifts, then pressing the pedal in as the shift finishes. I think I do this unconsciously now.

This is a common problem on third generation Integra hatchbacks. There’s a small lever attached to the hatch. You slide it sideways to trigger a solenoid on the car body that releases the lock, then lift to open. Mine stopped working maybe in 2004. Now I must insert the key and turn clockwise with one hand and lift with the other.

A search for “integra trunk actuator” turns up lots of results (a few: hatch lock stuck, G3 Rear Hatch Opening Problem 98+, hatch opener not working, How to Fix an Acura Integra Hatch Actuator, Fixed My Broken Trunk Latch). Some people suggest replacing part 74840-ST7-A01. I tried it but it didn’t fix the problem for me. I think I might have an additional problem where power isn’t reaching my trunk. Possibly due to a blown fuse.