I’ve been using Salt (for clarity and searchability it’s also sometimes referred to as Salt Project or Salt Stack) to manage the configuration of my web server since 2014. It’s similar to Puppet, Chef (I guess they call it “Progress Chef” now), and Ansible.

At Meebo we used Puppet to manage our server config. This was like maybe 2008 through 2012. It was ok. I don’t remember the specifics but I felt like it could have been better. I don’t remember if there were fundamental problems or if I just felt that it was hard to use.

Anyway, when we chose the configuration management tech at Honor in 2014 we looked for a better option. We made a list of the leading contenders. It was a toss up between Salt and Ansible. They both seemed great. I don’t remember why we chose Salt. Maybe it seemed a little easier to use?

I started using it for my personal web server around the same time. I’ve been happy with it. The main benefit is that it’s easier to update to a newer version of Ubuntu LTS every 2 or 4 years. My process is basically:

It’s an upfront time investment to write the Salt rules, but it makes the above migration fairly easy. I run it in a “masterless” configuration, so I’m not actually running the Salt server. Rather, I have my server-config repo checked out on my EC2 instance.

Salt does have weaknesses. Since the beginning I’ve felt that their documentation could be more clear. It’s hard for me to be objective since I’ve been using it for so long, but here are a few minor gripes:

So I’m happy with it and intend to keep using it. I suspect other options have their own flaws. I have a vague impression that maybe Ansible is a little more widely-used, which is useful to consider.

Also the modern approach to running your own applications in the cloud is:

So there’s less of a need to do configuration management like this on hosts. But it’s probably still valuable for anything you don’t want to run in a container (mail server? DB server? VPN server?).

Firefox as a Snap package in Ubuntu 22.04

In Ubuntu 22.04 Firefox is installed from a Snap package and not a dpkg like most other things and the update experience is awful. I get this notification:

However, closing Firefox and reopening it does not cause it to be updated. Apparently you have to either close it and leave it closed for a few hours until the Snap service’s next periodic update, which maybe happens every 6 hours, or close it and run a command to cause the Snap to update.

This is a terrible user experience. Nothing in the messaging informs me about the above. Also it’s absolutely unreasonable to expect the user to leave their browser closed for 3 hours (on average) until an update happens, and expecting a user to run a command manually is a poor experience. See this Stack Exchange post to see other people who were confused and annoyed by this behavior. Lots of people pointed it out in the comments on this post, too. Auto-updates should just happen and all the user should need to do is restart the application (assuming the application isn’t able to dynamically reload the affected files).

I also don’t understand why the Snap isn’t updated while the application is running. Linux is generally able to modify files that are in-use. It’s something that I see as a huge advantage that Linux has over Windows (for more discussion see this Stack Exchange question, answers, and comments). It’s plausible that some applications could misbehave if their files are changed while running—maybe Firefox suffers from this? But then I wonder what the update experience would be like if the user isn’t the administrator. Does the app get killed at some point so the update can happen?

A random thing I stumbled upon and thought was interesting: NASA runs a website where you can see the current send/receive status of each antenna in the DSN (Deep Space Network) as well as the spacecraft it’s communicating with.

The DSN is a network of antennae at three locations around the world (California, Spain, Australia) that send and receive messages from various satellites and other spacecraft. They’re roughly 120 degrees apart from each other to give complete coverage. The Wikipedia page has a ton more info.

Update 2022-08-13: A few months ago the app started crashing and kept crashing so I uninstalled it. Looking at the comments on Play Store, other people have had the same problem. That was on a three and a half year old phone (a Google Pixel 2). I have since uploaded to a newer phone so maybe the app would work now, but I haven’t tried. One thought I had is that maintaining this at the state level is more work than doing it at the national level, which is an unfortunate situation. Also I wonder if exposure notifications work across states currently, e.g. if someone from New York traveled to California.

I installed North Carolina’s SlowCOVIDNC virus exposure notification app and if you live in NC I encourage you to install it, too. You can get it from Apple App Store or Google Play.

So if you’ve been hesitating and wondering “I wonder what my computer programmer and security conscious friends think about this app?” The answer is I think you should install it.

I try harder than most people to avoid installing apps on my phone. I’m wary of apps causing problems either through incompetence or malicious intent. I think the risks in this case are low (much lower than any other random app, like a game or weather app) and the potential to reduce virus spread rate exists (and I barely even go out), so it’s worth it.

Voting by mail? Did you know that 28 states use signature matching to verify ballots?

They compare the signature on your ballot with one they have on file from voter registrations, ballot applications or the D.M.V. California apparently does this. NC apparently does not (we have to have two witness signatures, instead (Edit: Actually just one witness. Wasn’t it two for the primary?? Definitely appears to be just one now)).

All but 4 of those states have a process to allow voters to fix a mismatched signature. This process is sometimes referred to as “curing.”

Wondering what your state does? There’s a color-coded map near the bottom of this NY Times article.

I had a thought that there was some federal decision stating that all states must give voters an opportunity to fix invalid ballots, but I can’t find anything indicating such. Somewhat related, this WRAL article discusses uncertainty about how NC will handle incomplete vote-by-mail ballots.

For those of you who might otherwise vote a straight Republican ticket in NC, I’d like to draw your attention to two races.

An N&O article says this about the Republican candidate: “put on probation in connection with a stalking charge, and also has been accused of refusing to obey orders from police, causing a scene at a concert and threatening a man’s family over money.” To be fair the article also says he “has not been convicted on the criminal charges.” And I guess he has a master’s degree in public administration, which is maybe relevant. But! The Democratic candidate is so much better. Beth Wood has a degree in accounting and is a CPA. She’s the incumbent (first elected in 2008) and before that worked in the state auditor’s office as well as the state treasurer’s office. So she’s experienced and qualified. And political party shouldn’t even really come into play in this office!

Sure, you might like some of the things Mark Robinson says. He hits a lot of talking points Republicans care about. But he also has no experience in state politics. As a reminder, the lieutenant governor presides over the senate, and I’d argue that he is not qualified to do so. He makes a lot of offensive statements on Facebook, and also says weird things like “The looming pandemic I’m most worried about is SOCIALISM” and “When the TRULY innocent are murdered leftists could care less. In fact, they champion such” and “When will the Crips, Bloods, and Planned Parenthood start believing black lives matter?” He sounds unfocused and angry at everything. He does not sound like someone who would help a legislative body operate more effectively. The Democratic candidate Yvonne Lewis Holley, on the other hand, sounds fine. She has served in the NC house since 2013 so she’s familiar with the legislative process. The issues she cares about demonstrate compassion and I’d argue that that’s a valuable virtue.

Emily and the kids and I went camping for one night only at Hanging Rock State Park last night. It was good! A lot of work, but I think we all had a good time and it was definitely nice to get out of the house.

I mostly just want to make a record of this so I remember what it was like at their ages. They both did good in the car. They might not have napped at all.

We had a campfire. With s’mores. The marshmallows were especially popular. Three deer meandered through the campsite next to ours. Emily and I thought it was cool. The kids mostly didn’t care. It rained overnight while we were in our tent and we all stayed dry, so it was pleasant without being inconvenient. 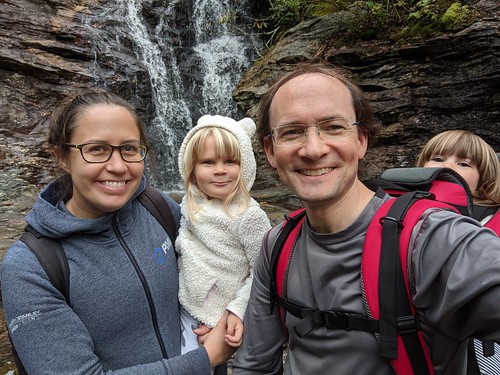 Ruby did a three mile hike yesterday and a one mile hike today, which impressed Emily and I. Edie stumbled a lot and I carried her in our hiking backpack most of the time. Ruby ate pasta out of a bowl without too much trouble. Edie had a hard time holding a bowl without spilling or dropping it.

I’m still very happy with the roof cargo box we bought (Yakima SkyBox 16 Carbonite). Good size. Works well. Super functional. And the built-in roof rails on our Subaru Outback are great, too. I didn’t factor factory roof rails into our decision process when we bought the car but I probably should have.

The artist Jane Kim has created some huge and amazing murals of monarch butterflies. See this photo of the side of a building in San Francisco. See the Migrating Mural section of her website for more murals, the featured work page for non-butterflies, and her Instagram page for more frequent postings. I think The Wall of Birds at The Cornell Lab of Ornithology is particularly great.

There’s also an absurdly awesome $295 shoe, if you’re into that kind of thing.