When we moved in to our new place our furnace wasn’t quite working. We didn’t notice it at first. It would turn on for a few minutes and sounded normal, but then it would turn off before reaching the temperature set on the thermostat. This is known as “short-cycling.”

Our furnace is a Gibson GL1RA 045N-08A. It’s a basic single-stage, non-condensing, natural gas, forced air furnace. The control board dictates the run sequence, which is something like this:

Due to the inherent danger of fire and explosive gas, modern furnaces include many safety sensors. If something is amiss the furnace errs on the side of caution and shuts itself off.

If the draft inducer blower isn’t able to move enough air (maybe a bird built a nest in the exhaust flue), a pressure switch detects this and shuts the furnace off. Because if hot gasses can’t exhaust properly the furnace could overheat. Or carbon monoxide could flow into the house.

The flame in a furnace is designed to follow a defined path: through the burner and straight into the heat exchanger. Flame rollout switches detect if a flame exists outside of this defined path and shut the furnace off.

The flame sensor is another important safety feature. As you can probably guess, it detects the presence of a flame. If there is no flame then the gas will be turned off within a few seconds. 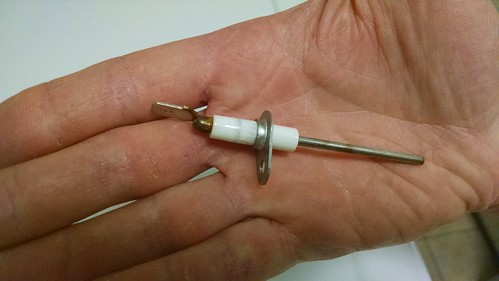 This is what it looks like! Please excuse my scaly climber hand.

The flame sensor is nothing more than a small metal rod. It mounts through a sheet of metal via an insulating ceramic bracket. The non-flame end of the sensor connects to the furnace circuit board.

It’s pretty insane how flame sensors work. From what I’ve been able to learn, it sounds like the control board applies an AC current to the flame sensor and electrons flow from the sensor through the flame to ground at the base of the flame, thus creating a measurable current. It’s called “flame rectification,” if you want to read more about it. The current is only milliamps but it’s enough to be detectable.

To work correctly the flame sensor must be clean. Apparently these things can accumulate enough residue over time that they become unable to reliably conduct the small current from the flame. That wasn’t our problem. Sometimes the heat from the furnace can cause the ceramic mounting bracket to crack thus causing the flame sensor to touch ground and short circuit, which makes it unable to detect the flame. Our flame sensor was grounding out, but this wasn’t the reason.

No, our problem was more unique. Each port in the heat exchanger contains a metal rod called a “baffle” that is apparently supposed to improve heat dissipation. One of the baffles was sticking out of the heat exchanger and pushing against the flame sensor. I have no idea how something like this happens. The baffle was not being held in place by the metal retaining wire. Probably a careless error during a routine servicing. 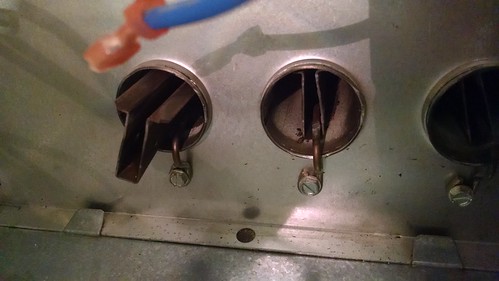 $160 for an HVAC guy to not quite fix the flame sensor problem, $30ish for a replacement flame sensor that I didn’t need, $20 for the replacement temperature switch, $6 for a roll of gas pipe teflon tape, and the biggest cost of all: About 50 hours of my time researching how furnaces work, watching many many YouTube videos about furnaces, finding and visiting a furnace parts store in SF, calling the HVAC guy, meeting him and discussing the problem, and of course writing this blog post.

Update:
After the above changes the furnace ran for longer, maybe 15 or 20 minutes, but was still short-cycling. I bought a digital manometer and static pressure probes. I measured external static pressure (aka the pressure difference across the furnace) and determined that it was higher than ideal, but reasonable. I measured gas pressure coming out of the gas valve and discovered that it was about 0.6″ WC high. I adjusted it to 3.5″ WC, as specified, and that allowed the furnace to run a few minutes longer, but it still short-cycled. I bought a digital thermometer with temperature probes and confirmed that the temperature near the temperature sensor really was at the high end allowed by the over-temperature limit switch. I made two final changes:

1 Response to Let’s learn about furnaces!