I Bought a New Bike!

I’ve been riding the same 2003 Fuji Silhouette since August 24, 2003. It’s served me well. I paid $500 for it and have ridden 8900 miles (averaging 1100 miles/year). I rode it to computer science classes at NCSU and to the traverse wall. I’ve biked across North Carolina. From Mountain View to Los Angeles. From Eureka to San Francisco (blog post 1, blog post 2). Crossed the Golden Gate Bridge 7 times. Crossed the Dumbarton Bridge once. Completed 6 centuries. (Side note: There is one inaccuracy on the bikepedia page I linked to above. The page says the spoke nipples were brass, but mine were definitely aluminum. I’m still using the original front wheel and I can’t adjust the spoke tension on many of the spokes because the aluminum nipples are corroded and rounded.)

I’ve wanted drop handlebars for a few years, for better handling, especially on descents. I also wanted a carbon frame and fork instead of aluminum, to dampen rough roads. And I wanted something a little lighter. My belief is that these things make riding more enjoyable.

Bike shops tend to put their 2011 models on sale in the fall, to shrink their inventory in preparation for their 2012 lineup. I visited 6 bike shops and tested 4 bikes. The first bike I tested was a Trek Madone 5.1 with SRAM Rival components. Maybe the build was goofy, but I wasn’t a fan of the shifters and hoods. They felt a little cheap and fragile. And DoubleTap felt unnatural to me. Maybe I didn’t give it enough of a chance. 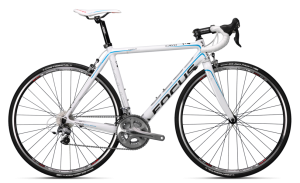 I rode a 2011 Focus Cayo 1.0 that was priced at $2400. I liked the appearance a lot, and I like that Focus is a smaller brand. But the Cayo lacked internal cable routing and wasn’t as light as I wanted. It also had a smaller bottom bracket than the bike I ended up with. 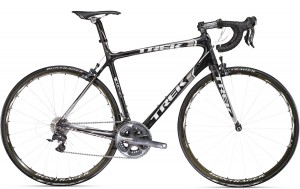 I settled on a 2011 Trek Madone 5.2 56cm, on sale for $2750. Trek doesn’t list the weight for this bike, but I think it’s around 16.5 lbs (edit: including pedals, saddle, Garmin Edge 800, and DuoTrap speed/cadence sensor it’s 17.5 lbs). I chose it over the SuperSix 3 because the Trek has a larger bottom bracket, the frame seems to be more reinforced around the bottom bracket, and all things being equal I feel like Trek has more experience developing Carbon frames.

A nice feature that I probably should have taken into account is that the Trek has a slot in the left chainstay to insert a wireless speed and cadence sensor. Normally this would have to be strapped to the frame. Having it internal in the chainstay makes for less clutter, and that pleases my “simplicity at all costs” mentality.

I’ve been using the same awful $40 Shimano mountain biking shoes since 2003. On the plus side the cleats are recessed quite a bit, which makes walking easier. On the minus side, they’re heavy, lace-up (laces + spinning gears = danger), and tend to cut off circulation in my feet on long, cold rides. Higher-end bikes generally don’t come with pedals. There are a few different types of pedals, and riders generally have a preferred pedal type. Rather than offer their bikes with every possible combination of pedals, manufacturers expect riders to provide their own.

I bought Shimano 105 SPD-SL pedals and Sidi Genius 5 Pro Carbon shoes. I’d heard good things about Sidi and they fit me well, so I bought them.

(Side note: Similar to pedals, riders also often have a preferred saddle (aka seat), so manufacturers generally don’t include high-end saddles on their bikes.)

4 Responses to I Bought a New Bike!